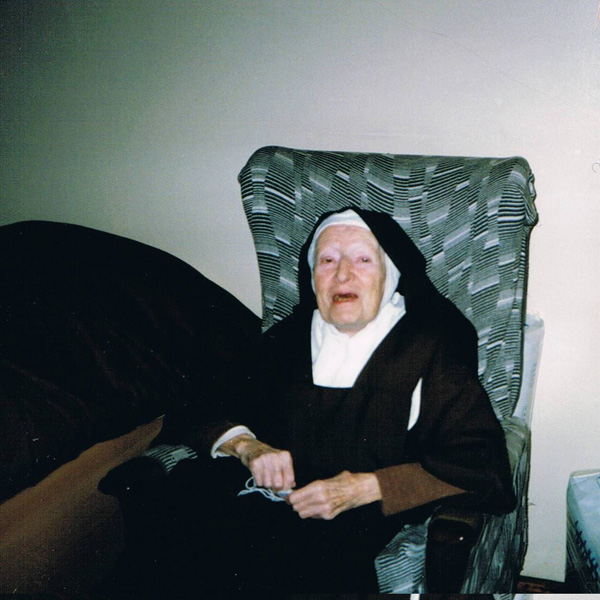 Posted at 09:39h in news by Notting Hill Carmel

Sr of the Heart of Mary (Norah Coyne) was born at woodford in Essex on November 15th 1910 and baptised in the nearby Franciscan church. She had one sister to whom she was devoted. Her Mother came from a staunch Church of England family and her Father, although of Irish Catholic stock, did not practice his religion. Norah therefore received her knowledge of the Catholic faith from her Ursuline schooling. An accident on the hockey pitch caused her a spinal injury that  led to increasing disability in later life. Her desire to become a sports teacher was discouraged by her father and so she took up clerical work in London. After joining the Legion of Mary she seriously thought about going as a missionary to China. But a priest whom she consulted directed her to Carmel and she entered Notting Hill in 1936. Her decision met with strong opposition on both sides of the family and she only had the support of her sister. Her mother eventually came to accept and was reconciled to her daughter. Alas her father never accepted her vocation and she never saw him again. In the last months before her death she seemed to relive the anguish of this time. She became very preoccupied with her father’s unhappiness and every day she agonised  afresh over the question whether she should have gone home to put his mind at rest. It was a revelation of how her heart must have been torn during her early years in Carmel.
With her strong and determined character and her straightforward approach to life, Sr of the Heart of Mary became a Carmelite of uncompromising fidelity and generosity, although hers was always an unassuming presence. On the Monday before Lent she spent the day in bed and on the morning of Shrove Tuesday she said peacefully, “I want to go home”. She remained conscious  all day, her mind clear, her sense perceptions sharpened (she could hear a whisper) as if her valiant spirit was already struggling free from the limitations of her wasted body. We thought the end would come swiftly but it was not until the small hours of Ash Wednesday that her laboured breathing finally ceased and she was able to take her flight to God, to whom her life had been so totally given. The opening antiphon at Lauds that morning was “My heart is ready, O God, my heart is ready”. Her heart was surely ready for the fulness of the loving encounter with her Lord.